This site uses cookies to provide you with a more responsive and personalised service.

London, 14 November 2018 - For the first time in five years, Hong Kong’s Causeway Bay has replaced New York’s Upper 5th Avenue as the world’s most expensive retail street by rental value, according to data from Cushman & Wakefield.

The annual ‘Main Streets Across the World’ report, now in its 30th year, tracks 446 of the top retail streets around the globe, ranking them by their prime rental value according to Cushman & Wakefield’s proprietary data, which includes a list of the most expensive streets in 65 countries. 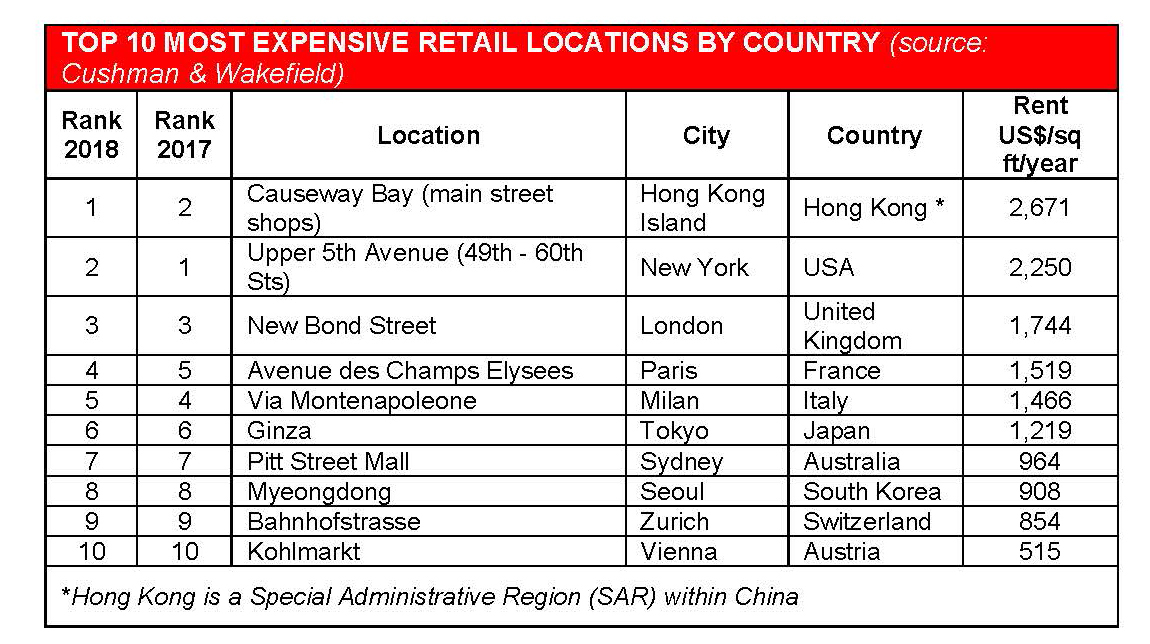 A significant decline in New York rents has seen Upper 5th Avenue slip back to second place globally, with average rents at $2,250 psf/yr compared with $3,000 in the previous 12-month period. Despite a small decline in average rents, Hong Kong’s Causeway Bay area takes top spot, with a figure of $2,671 psf/yr. London’s New Bond Street meanwhile is the most expensive European location, in third place globally, with rents broadly flat year-on-year at $1,744 psf/yr, underlining the fact that luxury and high-end retailers still see the UK’s capital as a key retail destination.

Elsewhere in the top 10, the Avenue des Champs Élysées is in fourth place ($1,519 psf/yr), with Milan’s Via Montenapoleone in fifth position ($1,466 psf/yr). Tokyo’s Ginza is the highest-ranked Asian street, with rents on average costing ($1,219 psf/yr). Streets in emerging markets in Africa and Latin America account for most of the locations at the other end of the ranking, with rents as low as $20-30 psf/yr.

The first edition of the Main Streets report in 1988 showed New York’s East 57th Street was the world’s most expensive high street at $425 psf/yr. Since then the number one spot has been dominated by streets in either New York or Hong Kong, with only Tokyo’s Ginza outside these able to achieve this.

“While global trends are not completely uniform, there are some common themes. The most notable include the continued growth of online, omni-channel retailing as standard and significant investment in store design. While technology is still a major disruptor in retailing, it is also enabling physical retail to fight back as it allows retailers to better understand their customers and to enhance the in-store experience.”

Justin Taylor, Head of EMEA Retail at Cushman & Wakefield, said: “There is still a healthy future for the sector but we are moving to a ‘beyond retail’ phase driven by societal and technological change meaning business models will also need to adapt. Traditional retail will survive and in many locations prosper, but it will likely form a smaller part of the overall occupier mix. Even in these most expensive high street locations, we are likely to see a mix of uses such as restaurants, leisure, fitness and services.

“As a result, traditional retail is therefore being resized, reinvented and reimagined. This is most evident in the US and the UK, both of which have felt the force of retailer restructuring and shrinking store networks in some sectors, as well as a downward readjustment of rents in some areas. Equally, however, the disruption is also creating opportunities for exciting new operators and formats to emerge.”

Across Europe, Kaunas in Lithuania provided the most affordable street at $19 psf/yr. The strongest growth year-on-year was seen in Porto's Baixa (Rua de Santa Catarina), with a rise of 30.4% to $98 psf/yr. The biggest rental decline was in Istanbul’s Bagdat Caddesi at -24% to end at $178 psf/yr. London’s New Bond Street is the most expensive street and the report shows that demand and rents in the city’s key thoroughfares have held up well. Four of the top 10 European cities are in Italy (Milan, Rome, Venice and Florence) and Germany’s top shopping street, Kaufinger/Neuhauser in Munich, places 10th.

In the US, a number of major department stores have been downsizing and creating shops aimed at a local catchment, with a greater focus on customer service rather than just product sales. The Food & Beverage sector continues to expand, albeit with an emphasis on ‘healthy, fast and casual’. More broadly, US retailers remain among the most innovative in the world, with leading companies shaping the future of retail through concepts where merchandising is driven entirely by app users in the local area. Much of what these companies are doing now will be standard in retailing in the next few years.

In China, ‘New Retail’, the concept of integrating online and offline channels, big data, logistics and a complex supply chain, has continued to drive rapid expansion. The role of bricks-and-mortar stores have been transformed from solely serving customers and selling products into an integrated platform. Traditional retail now serves a multitude of functions, including brand promotion, an experience centre for customers and as a distribution centre, particularly in the fresh produce segment.

The retail market in Hong Kong has experienced a rebound over the last year, driven mainly by a return of mainland Chinese tourists. With encouraging signs in tourist arrivals and retail sales, especially in the watch and jewellery category, luxury brand operators have shown interest in re-entering the market, if opportunities arise in good locations.

Causeway Bay returned to the top of the global rankings, while Chennai's Ambattur (MTH Road) in India was the region’s most affordable location at ($15/sq ft/yr). The biggest growth was in Makati (Metro Manila), Century City, Philippines, where rents grew by 69.3% to ($63 psf/yr).